Woolloomooloo’s iconic Finger Wharf would be a dream location for any restaurateur, so I couldn’t even begin to imagine how overjoyed Mario Percuoco is right now as he collaborates with the latest opening by Audacia Enterprises. As the son of Buon Ricordo’s Armando Percuoco, there’s an obvious pedigree and love for hospitality that sits behind Audacia Enterprises’ new venture, named Il Pontile, which has replaced the former spot of The Amalfi Way as the first restaurant you’d come across on the Finger Wharf if you’re walking in from the street.

It’s regional Italian done beautifully. That’s the long short of it, with fresh, crisp flavours worked up as a homage to the wharf’s typically breezy atmosphere. Grab a seat outside, of course, and soak in the brilliance of waterside dining. There’s not much Il Pontile needs to do to build up a palpably relaxing ambiance, but there are a few changes Mario made when transforming the spot from The Amalfi Way’s.

Primarily, this means more pronounced archways, a beautiful wine cellar, and furniture that’s much more attractive than Amalafi Way’s rather drab interiors. There’s even a nice chef’s table out in the open, facing the kitchen so diners can get in on the action without being forced to endure the unforgiving heat that chef’s do. 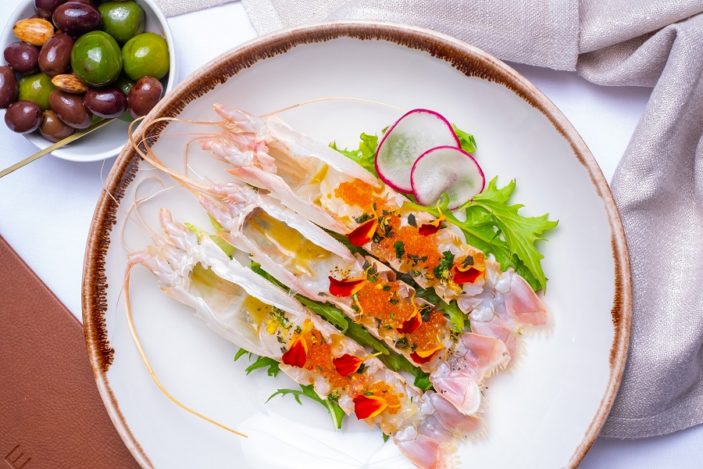 Fresh oysters come with citrus dressing here, and it’s of course a nice starting point if you want to dive into all the fresh seafood on the menu. The flavours of the sea are invariably a highlight of the menu, so don’t stop at oysters. Order up a lovely plate of thinly sliced kingfish with little pops of tobiko, and some jumbo scampi with finger lime. The kitchen has been smart here, and like most great restaurants they aren’t over indulging when it comes to dressing up their produce. The scampi is the highlight here with its gorgeous presentation, but it’s equalled by a wonderfully fresh and vibrant octopus salad flecked with celery and potato.

Before the inevitable plates of pasta, one of the most essential – and impressive – items on the menu should be part of each and every dining experience at Il Pontile. That’s the generous cubed slabs of watermelon, lightly coated in molasses and topped with a good amount of goat’s cheese. It’s the kind of out-of-this-world freshness that perfectly washes the palate and preps it for the hearty pasta dishes.

Although seafood is king here, the best pasta is the rigatoni with slow-cooked meat ragout. There aren’t any tricks or surprising combinations here. Just well-cooked pasta with a very flavoursome ragout that’s obviously been sourced well. It’s better than, but not by much, the Linguine al Cartoccio, which is Mario’s signature seafood linguini served in a parchment bag. It could have easily been a disaster had the seafood medley not been perfectly cooked. Although even if those huge shelled prawns weren’t packed full of flavour, the tomato-based sauce is a revelation.

A simple, large tiramisu order isn’t the only way to round out this feast, but it’s likely to be the most popular on the menu. It’s up there with the better pies I’ve had in Sydney, obviously built by someone who knows their way around the classic Italian comfort dessert.

FOUR STARS (OUT OF FIVE)

More to Explore on the AU: